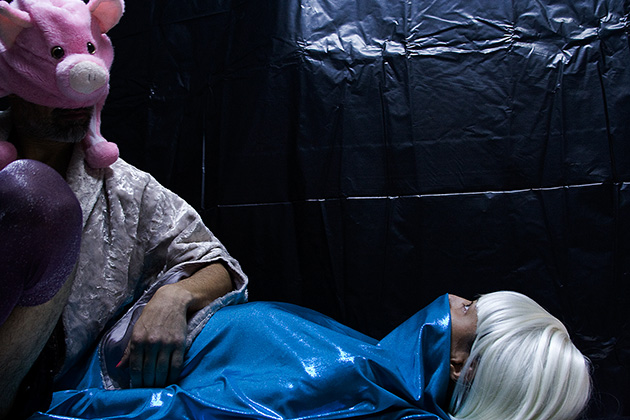 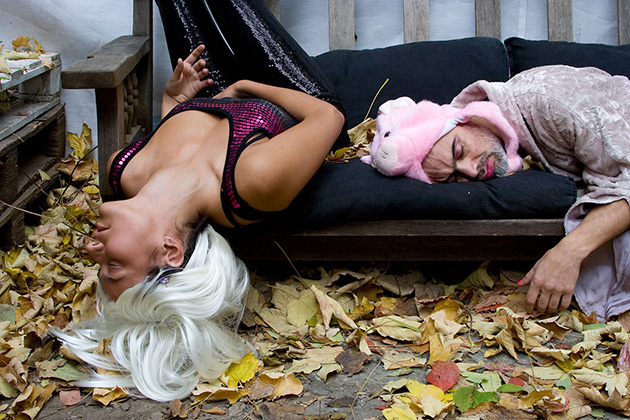 THE ALLEATER is the hard, but volatile mass in which we immerse our hand only to find out that our fingers are legs and our mouths – asses. THE ALLEATER is the edge beyond which gender, size and matter does not matter, because are in the same time male, female, in between, miniature, gigantic, consistent and fragile. In Alleater’s mouth stalks little, sexy black hole, blazing in its estrangement and in it the nothing yawns.


“The alleater is a figure of human without profile, gender or individual image. It is a central gestus of consumerism in contemporary world (or mixture of gestures and words) that is taken as starting point while attempting to understand who is this person passionately searching a “better eaten world”. Gaya Kostadinova transforms this into immediate, extreme physical presence. A hard actor’s work.”
Violeta Decheva, Kultura newspaper

“Is this is the Alleater – that question, of course, could never be conclusively resolved in a performance by Ani Vaseva. The refusal of ultimate meaning, the rejection of one final decision – this is a strong conceptual gesture that on the level of the meaning reflects in the insecurity of the character, in its incessant doubling, and on the level of the form is in contrast with the absolute punctuality of the technique, with the virtuosity of the performance”
Monika Vakarelova, Literaturen vestnik

“If now we are occupied with writing about the Alleater, then its own occupation is to “write” about theatre in general. Or the world in general.”
Demian Rоkosovski, stand.bg

The Alleater was created with the support of the Bulgarian Ministry of Culture, Plus Association and the fridge.